Use Platypush to manage your music activity, discovery playlists and be on top of new releases. 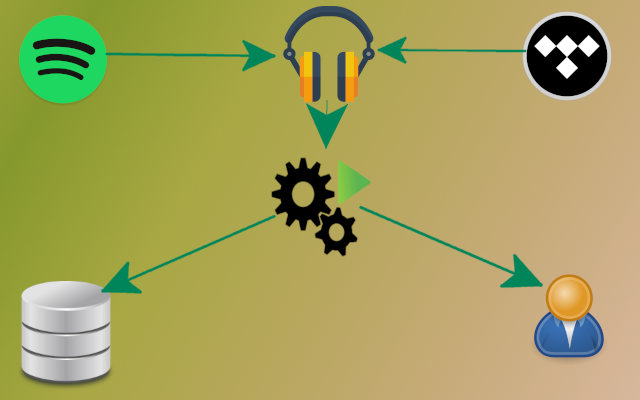 I have been an enthusiastic user of mpd and mopidy for nearly two decades. I have already written an article on how to leverage mopidy (with its tons of integrations, including Spotify, Tidal, YouTube, Bandcamp, Plex, TuneIn, SoundCloud etc.), Snapcast (with its multi-room listening experience out of the box) and Platypush (with its automation hooks that allow you to easily create if-this-then-that rules for your music events) to take your listening experience to the next level, while using open protocols and easily extensible open-source software.

There is a feature that I haven't yet covered in my previous articles, and that's the automation of your music collection.

The problem is that these services come with heavy trade-offs:

After migrating from Spotify to Tidal in the past couple of months (TL;DR: Spotify f*cked up their developer experience multiple times over the past decade, and their killing of libspotify without providing any alternatives was the last nail in the coffin for me) I felt like missing their smart mixes, discovery and new releases playlists - and, on the other hand, Tidal took a while to learn my listening habits, and even when it did it often generated smart playlists that were an inch below Spotify's. I asked myself why on earth my music discovery experience should be so tightly coupled to one single cloud service. And I decided that the time had come for me to automatically generate my service-agnostic music suggestions: it's not rocket science anymore, there's plenty of services that you can piggyback on to get artist or tracks similar to some music given as input, and there's just no excuses to feel locked in by Spotify, Google, Tidal or some other cloud music provider.

In this article we'll cover how to:

We will use Platypush to handle the following features:

This tutorial will require:

Setting up the software

Start by installing Platypush with the Tidal, RSS and Last.fm integrations:

If you are planning to listen to music through mpd/mopidy, then you may also want to include mpd in the list of extra dependencies, so Platypush can directly monitor your listening activity over the MPD protocol.

Let's then configure a simple configuration under ~/.config/platypush/config.yaml:

Start Platypush by running the platypush command. The first time it should prompt you with a tidal.com link required to authenticate your user. Open it in your browser and authorize the app - the next runs should no longer ask you to authenticate.

Once the Platypush dependencies are in place, let's move to configure the database.

I'll assume that you have a Postgres database running somewhere, but the script below can be easily adapted also to other DBMS's.

Run the script on your database - if everything went smooth then all the tables should be successfully created.

Now that all the dependencies are in place, it's time to configure the logic to store your music activity to your database.

If most of your music activity happens through mpd/mopidy, then storing your activity to the database is as simple as creating a hook on NewPlayingTrackEvent events that inserts any new played track on tmp_music. Paste the following content to a new Platypush user script (e.g. ~/.config/platypush/scripts/music/sync.py):

Alternatively, if you also want to sync music activity that happens on other clients (such as the Spotify/Tidal app or web view, or over mobile devices), you may consider leveraging Last.fm. Last.fm (or its open alternative Libre.fm) is a scrobbling service compatible with most of the music players out there. Both Spotify and Tidal support scrobbling, the Android app can grab any music activity on your phone and scrobble it, and there are even browser extensions that allow you to keep track of any music activity from any browser tab.

So an alternative approach may be to send both your mpd/mopidy music activity, as well as your in-browser or mobile music activity, to last.fm / libre.fm. The corresponding hook would be:

If you go for the scrobbling way, then you may want to periodically synchronize your scrobble history to your local database - for example, through a cron that runs every 30 seconds:

This cron will basically synchronize your scrobbling history to your local database, so we can use the local database as the source of truth for the next steps - no matter where the music was played from.

To test the logic, simply restart Platypush, play some music from your favourite player(s), and check that everything gets inserted on the database - even if we are inserting tracks on the tmp_music table, the listening history should be automatically normalized on the appropriate tables by the triggered that we created at initialization time.

We will again use the last.fm API to get tracks that are similar to those we listened to recently - I personally find last.fm suggestions often more relevant than those of Spotify's.

For sake of simplicity, let's map the database tables to some SQLAlchemy ORM classes, so the upcoming SQL interactions can be notably simplified. The ORM model can be stored under e.g. ~/.config/platypush/music/db.py:

Then create a new user script under e.g. ~/.config/platypush/scripts/music/suggestions.py with the following content:

Restart Platypush and let it run for a bit. The cron will operate in batches of 10 items each (it can be easily customized), so after a few minutes your music_suggestions table should start getting populated.

So far we have achieved the following targets:

Now let's put it all together with a cron that runs every week (or daily, or at whatever interval we like) that does the following:

Where is the ranking of the suggested i-th suggested track, is the set of listened tracks that have the i-th track among its similarities, and is the match score between i and j as reported by the last.fm API.

Let's put all these pieces together in a cron defined in e.g. ~/.config/platypush/scripts/music/discovery.py:

You can test the cronjob without having to wait for the next Monday through your Python interpreter:

If everything went well, you should soon see a new playlist in your collection named Discover Weekly [date]. Congratulations!

Another great feature of Spotify and Tidal is the ability to provide "release radar" playlists that contain new releases from artists that we may like.

We now have a powerful way of creating such playlists ourselves though. We previously configured Platypush to subscribe to the RSS feed from newalbumreleases.net. Populating our release radar playlist involves the following steps:

Let's put these pieces together in a new user script stored under e.g. ~/.config/platypush/scripts/music/releases.py:

Just like in the previous case, it's quite easy to test that it works by simply running refresh_release_radar_cron in the Python interpreter. Just like in the case of the discovery playlist, things will work also if you use Spotify instead of Tidal - just replace the music.tidal plugin references with music.spotify.

If it all goes as expected, you will get a new playlist named New Releases [date] every Monday with the new releases from artist that you have listened.

Music junkies have the opportunity to discover a lot of new music today without ever leaving their music app. However, smart playlists provided by the major music cloud providers are usually implicit lock-ins, and the way they select the tracks that should end up in your playlists may not even be transparent, or even modifiable.

After reading this article, you should be able to generate your discovery and new releases playlists, without relying on the suggestions from a specific music cloud. This could also make it easier to change your music provider: even if you decide to drop Spotify or Tidal, your music suggestions logic will follow you whenever you decide to go.